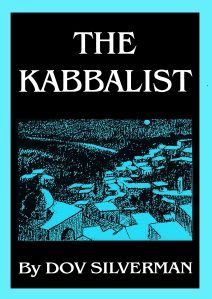 For a silver coin, Dov Silverman spins a golden tale. Unique and uplifting, original and fast paced, THE KABBALIST is a genuinely heart-felt, finely written novel with the boldness to raise questions that preoccupy everyone: Good and Evil. Reward and Punishment. Life after Death. The search for Transcendence is the greatest of all human endeavors.

THE KABBALIST tackles this quest straight on. This novel is written as much from the heart as from the head of a man who lived for more than twenty years in Safed, Israel, the world center of Jewish Mysticism (Kabbalah). The characters engender ardent emotional responses. The Kabbalist is a Rabbi whose faith is challenged when his son and his son’s fiancée die of different causes, in different places, at the same time. In addition, the people of Safed turn to Satan. The Kabbalist’s own sexual desires test his soul.

THE KABBALIST tells of Satanic rituals, young lovers threatened by eternal damnation, the conflict between three Rabbis: one who desires to control the world, one to save it and the other to flee; and a wedding of the dead. The story offers a solution to the historical controversy between religions.

THE KABBALIST opens in the office of the Secretary General of the UN meeting with representatives of the Anglican Church, the Pope and Saudi Prince, Keeper of the Seal of Mecca. The three churchmen quote Prophets predicting the War of Gog and Magog. Because of Kabbalistic interpretations by Rabbi Berel Caspi in Israel, the war is no longer believed to be between the nations of the east and west, but between the forces of Satan and the world’s religions. Satan is about to be freed from his confinement in the Upper Galilee. The battlefield is not Iran or Iraq but Safed, Israel, a hilltop town above the Sea of Galilee. Three Rabbis living in the 20th century immerse themselves in 16th century Jewish Mysticism to gain power in the fight for the future of mankind. Contradictions between Biblical promises of reward and punishment are argued in Heaven and Hell and resolved on Earth in a Kabbalistic solution that challenges the reader’s concepts of Good and Evil. Kabbala has become the in-thing for Jews and many non-Jews in the United States and around the world. In a simple, clear way, Dov Silverman conveys moral concepts, dramatic scenes, personal hopes and ideas. Helped by the United Nations representative and religious leaders, Satan and the Kabbalist struggle on a mountaintop in Galilee for the future of mankind. Perhaps, you the reader, will assume that Satan loses. But, in an uncanny mystical twist, the outcome rests in your mind. Only when you read the last page will your decision determine the future of mankind.